Winning awards is nothing new to this extremely successful salon, to date the salon have achieved a staggering 45 awards and accolades. Maria Mason Therapist and Business woman, proudly tells us that many years ago Beauty Time set the highest of industry standards, the year on year achievements of the Beauty Time team are testament to the fact that this team never sit back on their laurels and continue to be one of the Beauty Industry’s most success, respected and acknowledged salon. With a firecly loyal client base the Beauty
Time brand runs like a private members club, its aimed at those who are seeking expert Beauty Knowledge, result driven therapies and treatments.

The beauty therapists and front of house staff work seamlessly to ensure every visit to Beauty Time, is first class and worthy of the esteemed title “SALON OF EXCELLENCE”. Training at the very highest industry standards as an established team, means the experience of this team and Maria as the team mentor  is hard to match.

Maria is an industry advisor and expert in every sense, respected and loved by her piers and the industry as a whole for her never ending passionate and dedication to raise the standards within the industry. Why don’t you take a look at our “Beauty Time Bristol App” and learn more about why this Extremely talented team, are never out of the news. 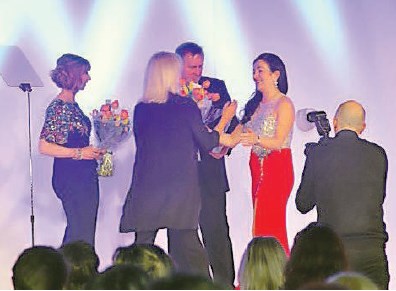 The Beauty Time Team would like to thank every one who continues to be part of this never ending story and all our beautiful clients that took the time to tell you in their own words, here are just a few messages this week from the lovely Nicola and Rebecca.

We care, it matters to us, we are an established team, committed to the clients that visit us, the industry as a whole and as a result our industry rewards and acknowledges us in this way

Beauty Time goes from strength to strength, in the line up of the top 30 most inspiration beauty salons within the beauty industry, Beauty Time is placed 4th, sitting alongside an impressive line up of Harrods Urban retreat at 2nd place, and the Richard Ward Hair and Metrospa at 7th!!!  The Beauty Time team are honored to be recognized in this way.

At a glittering Oscar style award ceremony in Mayfair London Beauty Time Secure their place in the history books of the Beauty Industry.  Winning Uk Salon Of The Year for the third consecutive Year, proving why this salon is a leader within today’s Beauty Industry.

Maria Mason took to the stage with her entire team, she thanked her staff, and clients and the industry as a whole, I am passionate to be part of the Beauty Industry, thank you all for being part of that.

“It takes a lot of dedication to run a successful business and maintain exemplary standards that see client returning time after time many clients have been with the salon for over 15 years,  Our clients are so proud to be part of the success story and encourage us in everything we do This award is as much theirs as it is ours”.

The votes have been cast and Beauty Time comes in at 11th position for Most Desirable salon 2010.

What the industry had to say about Beauty Time …Standards that would not be out of place in the most sophisticated Spas.  A lovingly stocked retail area, sumptuous couches, a beautiful garden to relax in before your treatments in the summer, or a cozy waiting area by the fire in the winter… This salon has it all   Each treatment is offered to the highest standards and the salon’s inventive ways of attracting and keeping its clients shows passion and flair.

Beauty Time is thrilled to be awarded ” 2010 Professional UK Beauty Salon of the Year” for the second consecutive year by Sally Phillips (Shazzer!) of Bridget Jones Diary.

In the Judges own words … This second-time winner more than deserves its trophy. This unique gem of a salon has unrivalled attention to individual care and works hard to make sure the level of service is extempary. Knowledgeable therapists who are able to confidently diagnose skin problems and communicate them to the customer in a friendly manner impressed the official visitor.  The salon has an impressive range of treatments and a focused approach to beauty.

It’s has many above and beyond factors, which cemented this salon’s winning spot.

The industry voted in its hundreds to determine who will be listed as the most desirable top 50 salons of the year.

The criteria, for remarkable retail, flawless front of house, superb staff, terrific treatments or delightful decor.  The top placed salons attracting the highest scores from thier peers for simply ticking all these boxes.

Beauty Time competes against beauty salons through out the UK to take home the top industry award  “UK Salon of Year ” at the professional Beauty Awards held in the Platinum suite of Excel in London.

The professional beauty awards are the most coveted awards within the beauty industry. Here is what the judges had to say:

“The official visit and mystery shopper both thought their treatment were the best they had, while clients praised the salon for knowing what they wanted even before they did.”

“Cleaning jewellery while you have your treatment, specialist Christmas gifts and loyalty rewards for regulars showed that the business sense is as dazzling as the customer service.”

“This salon is an exceptional experience for both the industry to learn from and clients to indulge in. We recommend that everyone make time to visit Beauty Time.”

For the 9th consecutive year Beauty Time are recognised and rewarded for being just that…Amongst the best of the best of Guinot Salons.

Not only does Maria Mason , movitavte and support the development and achievments of her team , she works hard within the beauty industry to support advise and develop her own buisness skill

Presented award to Therapist of the year 2019 at PB Award ceremony• Presented award to Beauty Therapist of the year 2008 at FHT  Award ceremony
• Presented award to Therapist of the year 2008 at PB Award ceremony
• Coached three Beauty Time therapist to achive Beauty Therapist of the Year (Cathlyn Fryer 2004) National nail therapist of the Year (Michelle Batchelor 2006) and Professional Beauty Rising Star of the Year (Suzy Harris 2006)
• Working with Guinot to demonstrate new treatments and products at Olympia and Excel trade shows
• Appearance on Channel 4’s How to Look Good Naked , demonstating Ultratone
• Regular contributor to trade magazines
• Guest Speaker along side Dorothy Purdew of Champneys at Santi Women in Buisness conference in Mayfair London
• Invited to sit as Beauty Expert on pannel at Clarridges
• Voted as one of Professional Beauty most desirable salons 2009, 2010.2011,2012, 2013, 2014, 2015
• Appearance on Local BBC TV – debate on mineral make-up
• Regular contributor to local radio programmes
• Guest speaker for Jill Morris in the buisness centre at Excel 2010
• 8 years Working as a Tutor for Judge Mark Horton in the under priviledge inner city schools ( helping young people understand working life and the importance of a postive attitude )
• 2013 Alex Polizzi Tv Programme working as a Beauty advisor
• 2013 Interviewed featured in Professional Beauty on success of Beauty Time
• 2013 Featured salon in Scratch magazine
• 2013 write up on India for the FHT
• 2014 Join Bristol City college Forum to advise New Therapists
• 2014 National Judge for Hairdresser federation “Britians Best competition “
• 2014 Headhunted to sit on a pannel for the new Government . Apprenticeships
• 2014 Advisor to Hairdresser federation for Beauty
• 2015 Guest speaker for Professional Beauty Buisness Skills in Dublin
• 2015 write up on Bali and therapies for FHT
• 2015 National Judge for Hairdresser federation “Britians Best competition “
• 2015 Worked with FHT on a video for Health Commission
• 2016 Featured in FHT magazine “ on the couch with “
• 2016 Guest speaker on radio Bristol on history of Make-

We use cookies to ensure that we give you the best experience on our website. If you continue to use this site we will assume that you are happy with it.Ok